The ensemble is focused; the students lock eyes with you as your preparatory beat rises. There is a human connection, a link between teacher and student that is palpable. The downbeat is placed, and the sound that follows from the clarinets is… terrible. It’s truly bad, like a partially opened jar of mayonnaise from Memorial Day that rolled under your driver’s seat and just now cracked open because you pumped your brakes too aggressively in Atlanta traffic. Unfortunately, this isn’t your major instrument, and it wasn’t even an instrument that you took to in methods classes in college. In short, you have no idea what to do to make what you just heard go away (not the students, the sound). 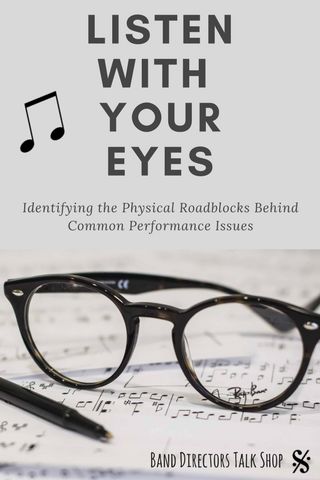 Have you dealt with a situation like this before? Why do students make uncharacteristic sounds? Is it because they have a latent, negative childhood memory of concert-C and are lashing out subconsciously? Most often it is not an intellectual or musical roadblock that gets in the way; it is a physical concept—the “how” element of sound production—that needs to be addressed. Take the following issues and teaching suggestions, for example:

These types of suggestions are not only common, they are frequently the default statements for younger teachers. Instead of just listening with your ears, listen with your eyes in order to find what might be causing these types of sounds. For the clarinet issue above, have the students show you their setup. Are their reeds too far down, or is one of them chipped so badly it resembles a mountain range? Are any of the trumpets’ main tuning slides pushed all of the way in (they just look better that way, let’s be honest), or is the pitch issue one person out of fifteen playing a B-natural instead of a B-flat? How is Stevie holding the triangle? The beater? How is his arm moving?

These types of issues require not only listening and watching but focused observation. Due to the setup of the room, this approach can demand that the teacher GET OFF OF THE PODIUM to better identify problems and solutions. Moving around the ensemble allows you to see and hear what the students are doing on an individual basis, while also holding them more accountable. Know that many horns are going to (successfully) try to get away with bad hand position if you only shout its importance from the conductor’s stand. Getting up close and personal can be very informative. For instance, it is nearly impossible to identify a clarinet beginner “hooing” (articulating with bursts of air instead of the tongue) without watching and listening to students individually.

There is another element that can inhibit a better student/teacher connection: the score. With one’s head buried in the music, it is impossible to see the frustration of the last-chair violinist during a scalar passage or a percussionist using only one mallet to play an eighth note line. It’s a bad idea to tour the edge of the Grand Canyon with your head buried in a map, yet the score is so often the default location for a teacher’s eyes.

However, score reading and study prior to class can provide the teacher with so much information in advance; virtually every pitfall is right in front of you. It is our job to empower the musicians with the tools that will provide success. So often the students allow their instruments to tell them what to do, i.e. “hey, kid… listen… these throat tones are just going to be sharp and nasal, so just deal with it.” It is up to the teacher to provide the students with the information that will allow the child to physically manipulate the apparatus in their hands.

Work hard to become an “instrumental psychic.” Get to know the pitch, response, and tonal tendencies of as many notes on as many instruments as possible; use this information to predict what might need to be addressed prior to rehearsals. Talk to your colleagues and add as many ideas as you can to your bag of tricks. The more issues you know exist, the better your eyes and ears will work in tandem to solve them. Instruments have been around for a pretty long time, and so have the problems—and solutions—that accompany them.

It can be frustrating to know that something needs to be changed but not know what that something actually is. It is often easier to identify a problem than to actually fix the issue and its accompanying concepts. Young teachers so often default to a verbal explanation as to what should change with the sound, but not with the instrument or its approach. Much like when you’ve been pulled over for speeding, talking your way out of it rarely works. There are concepts that surround the craft of playing each instrument in your ensemble. Physical suggestions are not only more pertinent; they can also have a longer lasting impact. Listen with your eyes and ears to find both the problems and the solutions.

Previous Post: « TMEA Clinic Previews for Band 2018 – Ideas You Can Use TODAY!
Next Post: The 100 Gig Challenge: Extraordinary Engagement through Service Learning »

Band Directors Talk Shop is all about helping you be a better band director so your students can be better musicians.  It is a collaborative effort of band directors, former band directors, private lesson teachers and fine arts administrators. Learn.  Posts will strive to teach you something you can use in your classroom today. ... END_OF_DOCUMENT_TOKEN_TO_BE_REPLACED