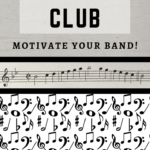 In the fall of 2000, I introduced the Vernon Band Scale Clubs to my students.  I printed out the major scales and transposed them for each instrument and handed them to each member of the band.  I work through one scale per week with the band as a warm up and to introduce different key signatures to them.  We do not try for speed and sometimes will play each scale in whole note values.  After 12 weeks we move to the natural minor scales and play them in a similar manner. For the last 12 weeks, we match the major scale with its minor during warm-ups.  All percussionists play the scales on the mallet instruments or on the piano in the rehearsal room.  The percussionists switch instruments at each rehearsal. 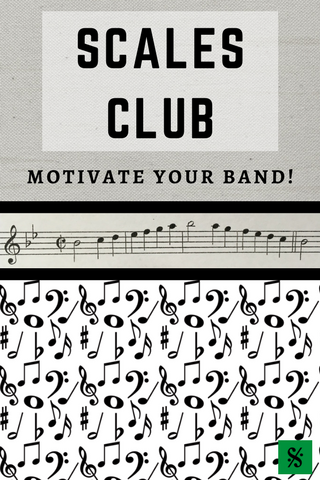 During the lessons, to reinforce the concept of scales, I started having the students play through the scale that we were using in rehearsal that week.  Since this was a year of the Olympics it was easy to label the scale clubs as Bronze Silver, Gold and Platinum.

In order to make the Bronze Club, each student must play the Concert Bb, Eb, and F scales one octave from memory.  The students are allowed to pick any other three scales and play them to move into the Silver Club.  Three additional scales ranks the student in the Gold Club and the final three major scales puts them in the Platinum Club. Percussionists are allowed the choice of scales on a mallet instrument or rudiments on the snare drum.  They must play the required Bb, Eb, and F scales before going into the rudiments.  They are required perform a rudiment 16 times correctly to match the 16 notes in the major scale that the other band members must play.  So far all of our percussionists have chosen to play the scales.

Only the first three scales are required from memory since the emphasis was having the students becoming interested in learning the scales and comfortable playing in different key signatures.  There are different awards for each scale club (listed at the end of this article), but I found having the student names read in the school-wide daily announcements with the scale club they were in was a large incentive at the middle school level.

In the space of 7 weeks there were 10 students who had completed all 12 major scales and were interested in the next level. I printed out the natural minor scales and we created the Double Bronze, Double Silver, Double Gold, and Double Platinum Scale Clubs.  Students were not required to memorize any of the minor scales and I encourage them to write in the accidentals that they need for each scale.  This gives me a good chance to teach a little music theory in a practical setting.  I keep track of the scales that students pass so they can play one or more scales at a lesson, as they feel ready.

After 12 weeks there were 18 students at the Double Platinum level and I was challenged to find a new Scale Club to maintain their interest.  The answer was the All-State Scale Club.  Students are required to play one octave of all 12 major scales from memory at a metronome speed of quarter note equals 72. This is slower than the High School speed of 88 but still placed a large challenge on the student.  As with the High School requirements, the musician must play tongued up and slurred down or slurred up and tongued down.  Students who achieved this level would have their name and the date they entered the All State Scale Club engraved on a special plaque in the band room.

The students rose to the challenge and at the end of the first year we had 5 names engraved.  Now after three years, we have 18 members in the All-State Scales Club.  All members of the scale clubs are published in the concert programs and the All-State Scale Club plaque is on display.  In addition, the Scale Club members are listed on a bulletin board in the main lobby of the school and on our band website.  When I have had a particularly busy week it is not uncommon for a student to remind me to update the names.

The benefits of the scale club concept have shown up in increased practice by the students, especially when we are close to the deadline for the concert program to be printed.  I have noticed that the band makes fewer mistakes at key changes in the music and that they have a better understanding of the sound of minor tonality.  By combining elements of the large ensemble rehearsal with the individual lessons there is a greater continuity of learning for the student. By integrating some basic music theory elements in the learning format is possible to teach to several of the National Music Standards.

What started as an experiment has turned into a vital part of my curriculum.  The students often volunteer to play their scales at the beginning of their lesson and the band as a whole has learned some music theory concepts and improved their basic technical level.  Students are less afraid of new key signatures and more willing to write in the accidentals.  While playing scales may never be fun, at least now there is a non-threatening way to encourage students to learn and play the major and minor scales.

Awards: These can be found in the Friendship House catalog.
Bronze Club = Music Pen #1278
Silver Club = Notebook (recommended for their lesson to write down instructions.)
Gold Club = Music Water Bottle #5702
Platinum Club = One of my Jazz or Concert CDs.  (A good way to weed out your collection of demo CDs or low cost close outs at Tower Records or Sam Goody’s.)
Double Bronze = Pencil #0400
Double Silver = Music Post It Notes #939 (girls like them and I tell the boys to give them to their mothers.)
Double Gold = Key ring #456
Double Platinum = T-Shirt with a special Double Platinum design.  It is interesting to see some the high school students still wearing their middle school Double Platinum Scale Club shirts at school.
All-State Club = Name and date engraved on a plaque.

Related Reading:
Jar of Dooooom (Changing up Your Scale Routine)
Teaching Students to Perform Their Best at Auditions
Teach in Cut Time – Play the Method Book in Cut Time!

Band Directors Talk Shop is all about helping you be a better band director so your students can be better musicians.  It is a collaborative effort of band directors, former band directors, private lesson teachers and fine arts administrators. Learn.  Posts will strive to teach you something you can use in your classroom today. ... END_OF_DOCUMENT_TOKEN_TO_BE_REPLACED