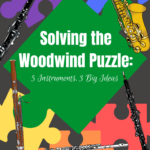 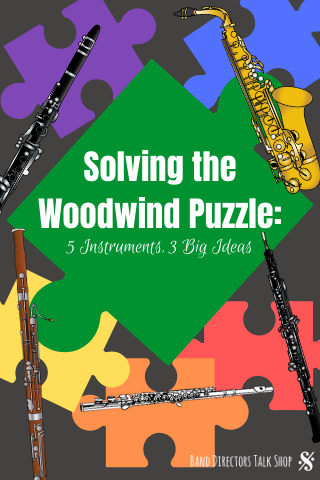 Exception: whenever you see a “roller” key (as on bassoon, saxophone and sometimes on flute), you know that the rollers are there to facilitate lateral motion between those keys.

Flute
The common mistake that students make in the third octave is simply overblowing the fingerings one and two octaves lower. The technique may come more easily this way, but the pitch, response and tone are poor. It only takes one flutist (or worse yet, piccolo player) in a flute section playing the overblown fingerings to cause a very annoying pitch problem in the upper register of an ensemble.

There are three mechanisms of overblowing on oboe—the half-hole and two (sometimes three) octave keys—which must be used in the correct ranges. Remember: Oboe and Bassoon have three half-hole notes each—the first three in the second register, and the oboe is the only woodwind that has no open note!

The oboist absolutely must learn to use both regular and forked F from the outset. Because most oboists’ early years are spent in a band class playing in flat keys, without vigilant teaching, it is not uncommon to find a young player using forked F in every situation, and depriving himself or herself of the best F on the instrument.

The other problem, almost as pervasive, is the use of middle-finger F# to the exclusion of the chromatic F#.  Otherwise, there are very few complications in comparison to the other woodwinds until one crosses into the altissimo register (above high F or F#)

Recipient of the VCUArts Award of Excellence, Charles West has taught all five woodwinds on the university level and has performed professionally on four of five woodwinds for over four decades. He has been a Fulbright Scholar, International Clarinet Association President, and Principal or Bass Clarinet in six professional orchestras on two continents, and has recorded repertoire on the Klavier, Wilson Audiophile, Centaur, CRI and Crystal labels and on a Grammy Award-winning Telarc CD. He has held professorships in three North American universities, and guest residencies in South America, Taiwan, Hong Kong, Australia, and China. West has recently retired as coordinator of Winds & Percussion at Virginia Commonwealth University, is artist-clinician for the Buffet Group, Conductor of the Youth Orchestra of Central Virginia and author of Meredith Music Publications’ Woodwind Methods: An Essential Resource for Educators, Conductors & Students

. (This article is based on information from this book.)

Previous Post: « The Band Registry Fundraiser: Easy Fundraising Without Selling Anything
Next Post: Free Note Name Generator (You will LOVE this!) »

Band Directors Talk Shop is all about helping you be a better band director so your students can be better musicians.  It is a collaborative effort of band directors, former band directors, private lesson teachers and fine arts administrators. Learn.  Posts will strive to teach you something you can use in your classroom today. ... END_OF_DOCUMENT_TOKEN_TO_BE_REPLACED