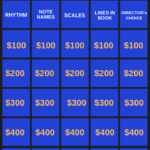 Teaching beginning band with this game is a great way to make class more fun while reviewing many different concepts.  Categories can include anything you want to review. In this example we’ll use rhythm, scales, note names, lines in the book, and director’s choice. 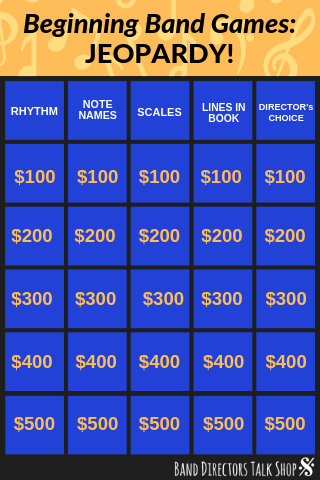 Write this on the board before class begins: 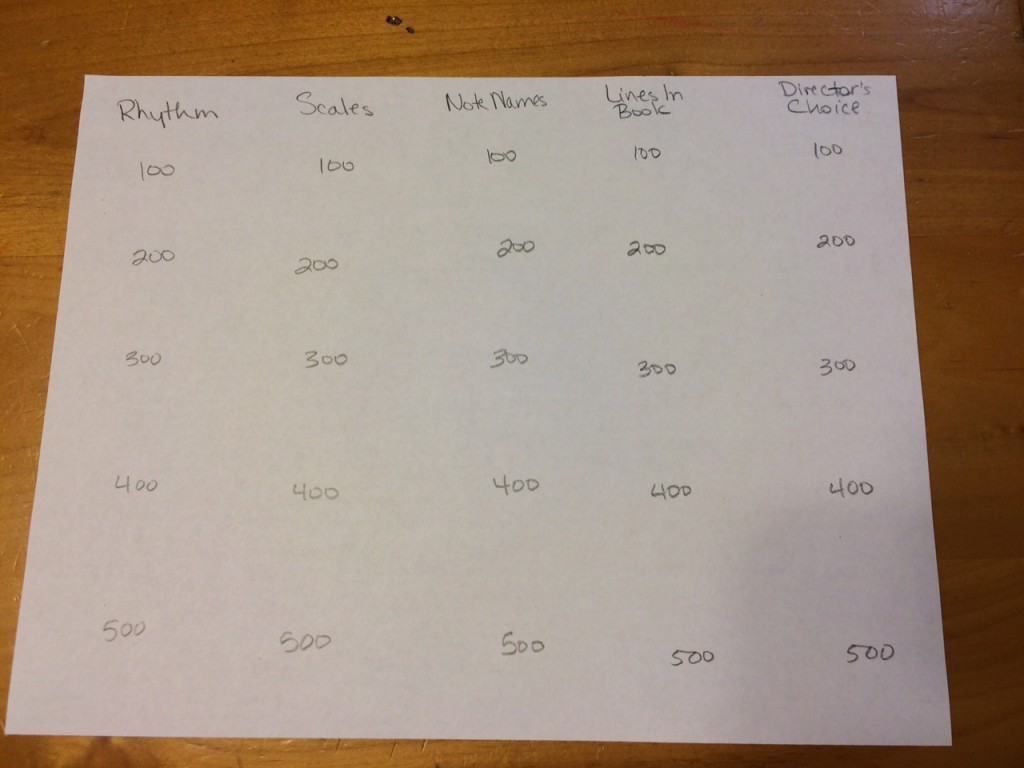 Warm-up the class with your usual routine. Then split the class into 2 teams.  Assign (or let the teams pick) a team captain to make the final choice on which category/points they choose.

Team A wants rhythm for 100 so I write this rhythm on the board. 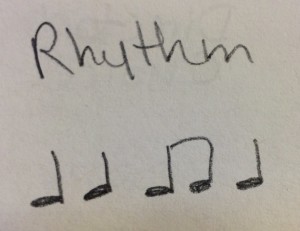 The whole team counts the rhythm.  If you feel like it is satisfactory (I usually say 95% correct with everyone participating) Team A gets the points credited to them on the marker board.  If they don’t get it right, Team B has a chance to steal for 1/2 the money.  The reason I do this is to encourage all students to stay engaged even when it’s not their turn.  If Team B is not paying attention, I won’t let them try to steal.  If Team B misses it as well, then I help the whole class count it correctly. I make a mental note that this rhythm is one we need to reteach. If Team B counts it correctly, they get the 100 points and still get to go next.  (They aren’t penalized their turn because they stole 1/2 credit.)

Team B chooses scales for 100 and the whole team plays the concert Bb scale 1 octave.

Team A chooses note names for 300 and needs to name the 5 notes correctly in about 30 seconds.  (Jot them on the board quickly.) 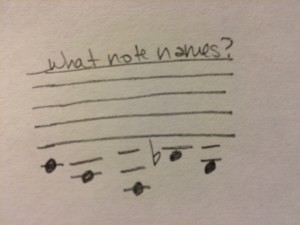 This example is for a french horn class – the reason it is worth 300 is the ledger lines make it trickier and the kids aren’t reading this in the book yet.  I have the team discuss and agree and then the team captain gives the answer – the kids can help the captain, but the captain’s answer is final.

Team B chooses Lines in the Book for 100.  However, even though it sounds good when they play it, 2 students aren’t ready to play when it’s time to start and 1 student isn’t really participating.  So I would give the other team the chance to steal.

Team A chooses Director’s Choice for 200.  I would have them play a lip slur of my choosing from their daily warmup.  If it’s a small class I might also have them play it individually or in groups of 2 or 3.  I do reserve the right to give them partial credit anytime I want.

If during Team A playing down the row someone on Team B is talking I will calmly go to the board and take 50 points off their score and let them know they last 50 points for talking.  I do the same thing if they are rude to the opposing team or overly exuberant after a correct answer to keep it under control. Usually after this happens once or twice behavior is exceptional.

I normally don’t do a Daily Double, but if one team is way ahead and I need them to stay involved I might decide to call something the daily double to try to help them get back in the game.  One caution – as the kids figure out that the teams that choose higher point values often win, they’ll go straight to 500.  So I make those hard enough that they really have to work for it.  You could choose to make them go straight up 100, 200 etc, but I don’t.  Also, if you have time after the first round you can start Double Jeopardy.

Here’s a sample of what I might have jotted down for questions before class: 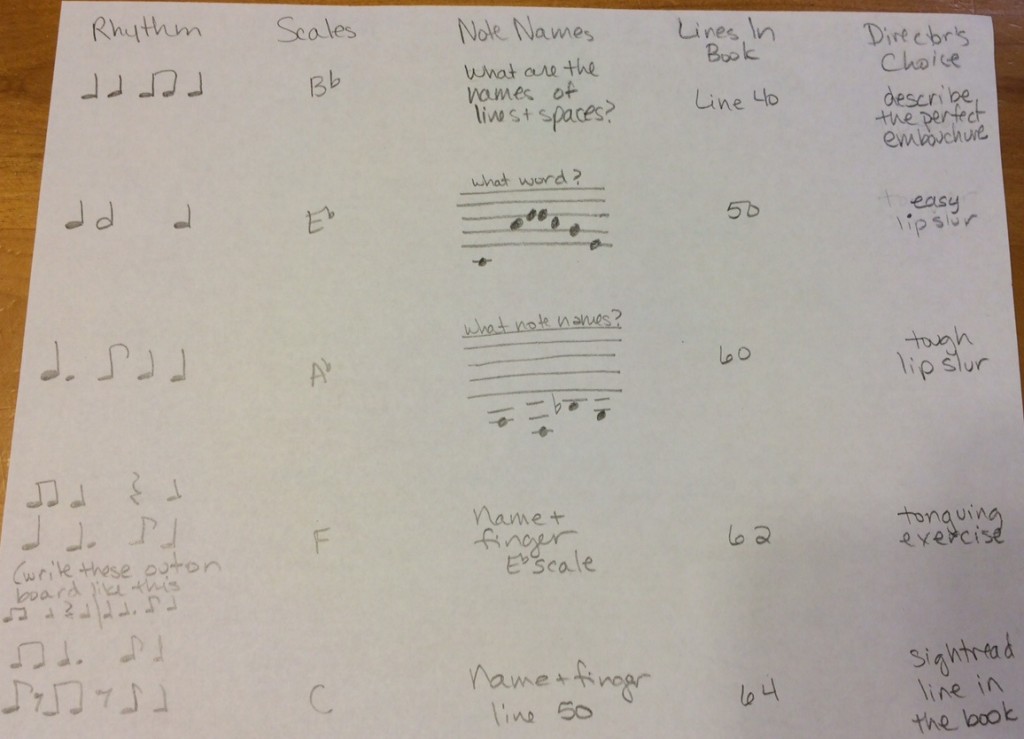 Jeopardy is perfect for review and is ideal for when you have to combine classes for some reason.  Then it can be clarinets against trombones for example.  When teaching beginning band in large groups (such as when a co-teacher is absent) it helps make good discipline and high engagement easy. 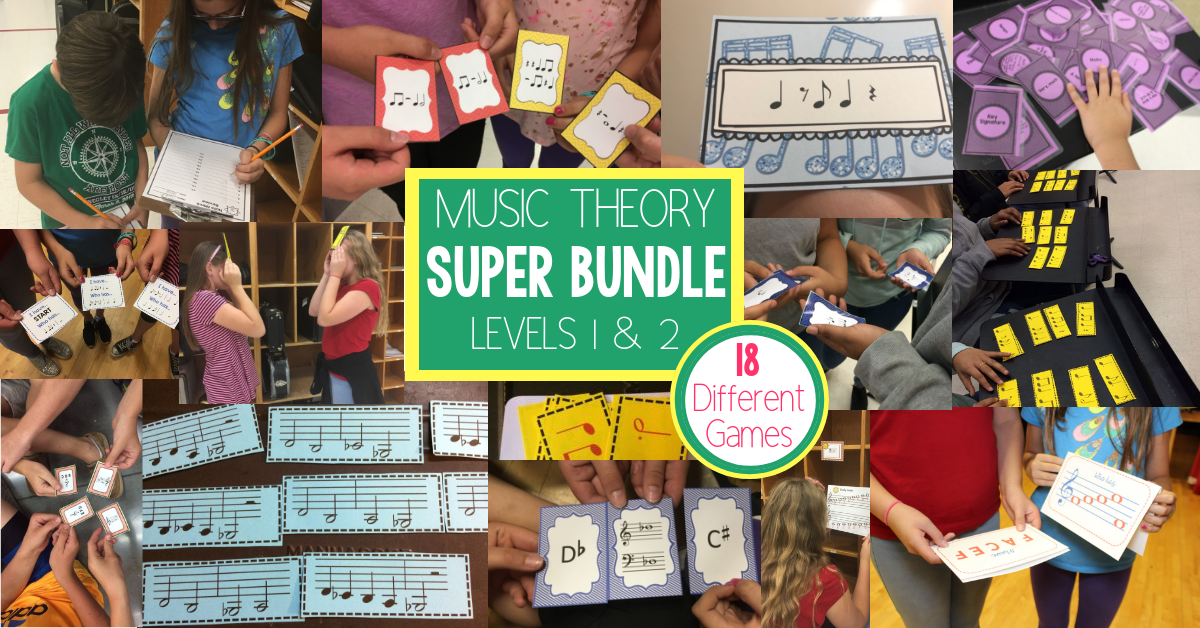 Band Directors Talk Shop is all about helping you be a better band director so your students can be better musicians.  It is a collaborative effort of band directors, former band directors, private lesson teachers and fine arts administrators. Learn.  Posts will strive to teach you something you can use in your classroom today. ... END_OF_DOCUMENT_TOKEN_TO_BE_REPLACED