Most often, I begin a discussion of breath support with students by asking the question, “What is the difference between breath support and blowing hard?” And sometimes, this sort of discussion is preceded by a demonstration of involuntary support—by playing in a sitting position with the legs extended straight out front (legs parallel to the floor) or in a standing position by standing on one leg with the other lifted fairly high and playing. When the improvement is noticeable—often vast—the discussion ensues. 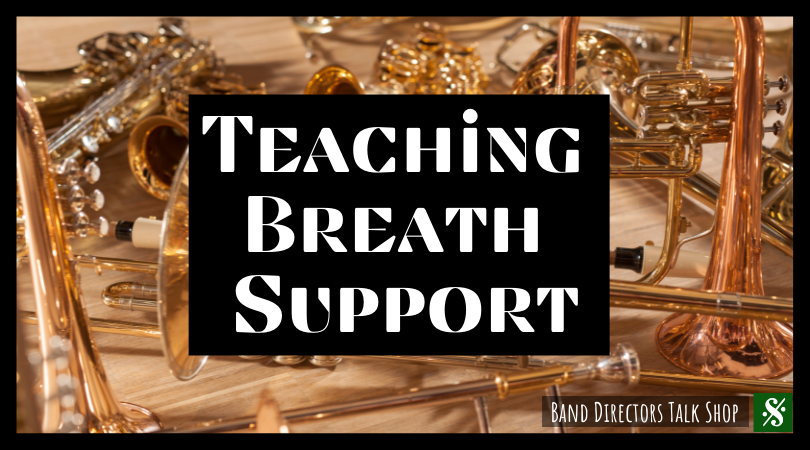 Breath support is taught in a variety of ways, but virtually all approaches involve some form of forceful exhalation and some form of resistance to that exhalation. Regardless of approach, all would likely agree that “breath support” and “blowing hard” are not the same thing.

To illustrate the concept of support, consider that a long wooden board may be inherently strong, but unless it leans on something else, it is not likely to stand vertically on its own. However, if two boards were leaning against each other with each resisting the other’s tendency to be pulled over by the force of gravity, then the force of gravity pulling each board in opposite directions would create stability. It would be less likely that they would fall over because one board would be supporting the other.

In the same way, the mechanics of breath support involves diaphragm muscle resisting the strong pushing action of the muscles of the abdomen.

The diaphragm is a powerful muscle lying horizontally between the chest and abdominal cavities, functioning as the floor of the chest cavity and the ceiling of the abdomen. When relaxed and the lungs are relatively empty, it is dome-shaped, attached around the perimeter to the inside of the ribcage. When the diaphragm tightens, the dome flattens and creates a vacuum in the lungs, and air rushes in from the mouth and/or nose. When it relaxes, we “sigh,” and the air escapes from the same opening through which it entered.

Generation after generation of wind students have believed that one pushes the air out with the diaphragm while playing and that the diaphragm is located somewhere mid-abdomen. Anatomically this is simply not true.

The mechanics of inhalation involves flattening the diaphragm to pull the lungs downward and create negative pressure. Ideally, the exterior of the abdomen expands to its maximum distention (pushing outward against the belt), and then the middle and upper parts of the thoracic cavity follow in smooth succession until the lungs have been filled, stretching them both vertically and horizontally in all directions.

Exhaling, the diaphragm muscle provides resistance to the abdominal muscles’ efforts to push the bottom of the lung upward. This resistance results in pushing the air out of the body firmly and with stability. While consciously pushing upward with the abdomen, engage the diaphragm by spreading the ribcage to stretch the diaphragm like a drum head. Pushing upward abdominally with diaphragmatic resistance utilizes the player’s strength much more efficiently. Remember to keep a reservoir of air under the sternum so that the upper chest remains large and does not collapse at the beginning of the exhalation.

Here are some techniques for illustrating this to students:

Keep the diaphragm fully engaged by keeping the ribcage as large as possible. It may help to imagine (or to actually use) a belt loosely around the bottom of the ribcage. As you blow outward, keep the ribcage large so that the belt does not fall until the very end of the breath.

Teaching students to inhale the maximum quantity of air is a perennial challenge.

Charles West is Professor Emeritus of Clarinet at Virginia Commonwealth University. A conductor, clarinetist, and woodwind specialist performing throughout the United States, Europe, Latin America, Australia, and Asia, he appears regularly in international venues, and he has recorded repertoire which ranges from standard sonatas to avant-garde. West is heard on numerous labels, including Klavier, Wilson Audiophile, Centaur, CRI, Crystal, on a Grammy Award-winning Telarc CD, and is seen and heard in the Academy Award-winning Spielberg film, Lincoln.

A Fulbright Scholar and a frequent presenter at the Midwest clinic, his books, all dealing with woodwinds, are published by GIA Publications. He is a Buffet Crampon Clarinet Artist and is the recipient of the VCU School of the Arts’ highest faculty award, the Award of Excellence. The International Clarinet Association honored him with Honorary Membership during the Summer of 2020.

Previous Post: « The Three Keys to Retention in Band
Next Post: 4 Ways to Get Band Students Excited About Leadership »

Band Directors Talk Shop is all about helping you be a better band director so your students can be better musicians.  It is a collaborative effort of band directors, former band directors, private lesson teachers and fine arts administrators. Learn.  Posts will strive to teach you something you can use in your classroom today. ... END_OF_DOCUMENT_TOKEN_TO_BE_REPLACED