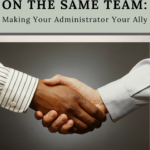 I’m sure that the vast majority of us band directors were brought up to be defenders of our content. Instead of being recognized as contributing to the overall education of the student, music and other fine arts have been identified as dispensable by many in our government. I remember clearly having horror stories about this told to me in my college classes and at band camp after I had graduated. The stories were always concluded with, “It’s not enough to teach music.  You must always be an advocate as well.” 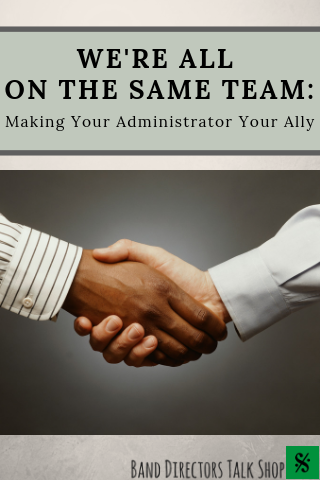 While I agree with the need to advocate, I think it is important to discuss the method we choose to act on this idea. I have observed many who believe strong arts education advocates must be combative. Amongst ourselves, we talk about “fighting” our administration. After my time as the Fine Arts Director for a large school district, it’s difficult for me to imagine something more counterproductive than getting into a fight with your principal or district administrator. In most cases, your principal wants to be your advocate. They just may not understand how.

Don’t forget that you and your principal likely got into education for the same reason: to positively impact the lives of children. Your administration simply started out by doing so through another content area. And now, in their current position they are being pulled in many directions by the teachers they are expected to lead and attempting to comply with all of the district policies given to them by those in the administration building. It is a difficult place to be and we are better off supporting them instead of becoming someone that adds to their stress level.

Here are a few simple suggestions on building a relationship with your administrators:

By building a relationship with your principal based on substance and trust, you change every interaction with him/her for the better. In my opinion, this is a far more effective way to advocate for music education.

Dr. Daniel Loudenback is currently Assistant Professor of Woodwinds at The University of Mary in Bismarck, ND.  Before that, he was Fine Arts Director for Ector County ISD in Odessa, TX.  He also taught high school orchestra and middle and high school band in West Texas.  His book, “The Young Saxophonist: A Supplemental Method for Class Instruction” is available through N-Tune Music and Sound.  Dr. Loudenback is a Yamaha Performing Artist and plays exclusively on Yamaha Saxophones. Learn more at www.danielloudenback.com

Related Reading:
How Playing an Instrument Benefits your Brain
Rhythm Envelope Game – Teaching Beginning Band with Games
Working With District Initiatives, Not Against

Band Directors Talk Shop is all about helping you be a better band director so your students can be better musicians.  It is a collaborative effort of band directors, former band directors, private lesson teachers and fine arts administrators. Learn.  Posts will strive to teach you something you can use in your classroom today. ... END_OF_DOCUMENT_TOKEN_TO_BE_REPLACED