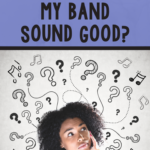 For my first several years of teaching band, I wanted my bands to sound great. And I really wanted that Superior rating! But while I could teach my students to play correct notes, rhythms, articulations, and other things that were written on the page, my bands still did not sound great. I did not know why or what to do about it. Several years and Superior ratings later, I want to share some things I wish I knew back then: common reasons why bands do not sound good, and how to fix them. 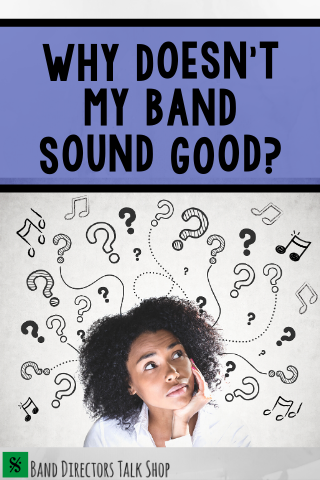 I. Holding Notes Out All The Way And Ending Together

Most bands start their notes together, but few end their notes together. When members of the band are ending a note at different times, it sounds very sloppy. It is most obvious with whole and half notes, or notes followed by a rest, but it is true for quarter or eighth notes as well.

“A note ends when you get to the next note/rest.” This is what they need to understand. The problem is that we tell them, “A whole note gets 4 beats,” so they stop on beat 4 because they are thinking about the number 4. Or they just stop at a random place to breathe and think they are fine as long as they start the next note on time.

Okay, so how do we fix it? Use the following exercise (or one like it). Notice the “stop – 2 – 3 – breathe” instructions over the whole rest. Insist that everyone stops exactly on beat 1. Record the band playing, and then play the recording back to them, so they can hear for themselves if they succeeded. This exercise will train them to be vigilant about ending notes together, but you will need to consistently reinforce the concept when they are playing other music. Ask them to tap their heel or toe gently with the beat while they are playing, so that they can feel the beat and stop when their foot comes down on beat 1 of the whole rest. 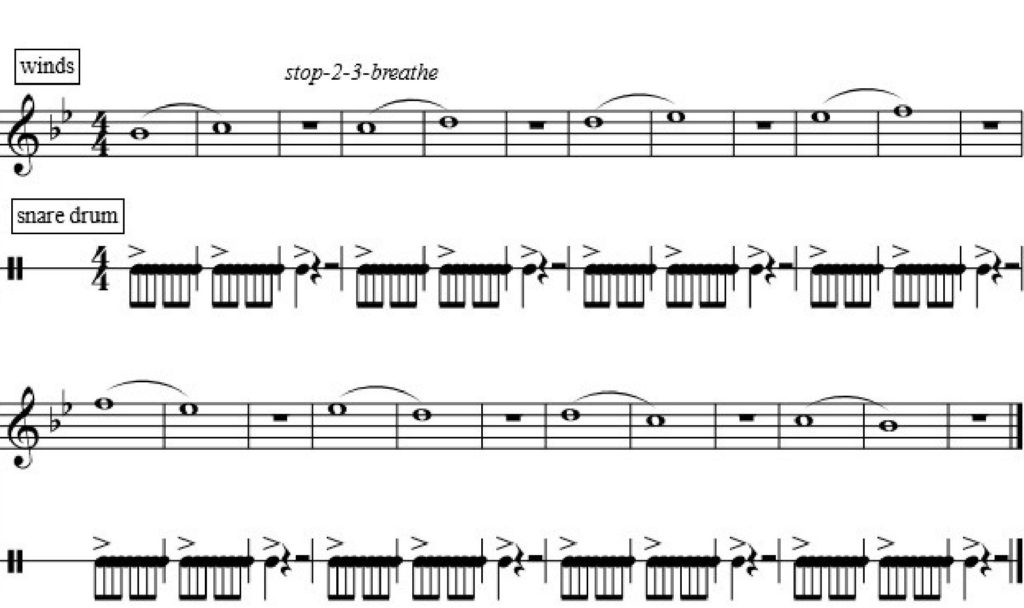 This relates strongly to the previous issue and can be taught at the same time. All notes must be held all the way with a steady sound. If students do not do this, the band will sound sloppy (and out of tune), and it is a very common problem. The problem is caused either by the air not being steady or by unnecessary movement in the body or embouchure. Maybe both.

You can use that same Long Tones exercise to address this. Insist that each of those whole notes be steady. Record and play the recording back for the band so they can evaluate if they succeeded.

But do not stop at whole notes; quarter notes must be steady too. A simple Bb scale in quarter notes can be used to address this.

Modeling is very helpful, so students know what to listen for.

III.  Tongue As Softly As You Can

Tonguing too hard does a lot of bad stuff. It makes the articulation sound harsh, abrasive, and percussive. But it also causes embouchure problems. The percussive force of the air causes the lips to be blown forward, and they have to tense up to compensate. This tension makes it harder for the student to produce a sound, so they may tongue even harder to compensate. And now we are in a vicious cycle.

The bad habit of tonguing too hard may also go along with the bad habit of moving the jaw or lips while tonguing, resulting in a bad “twah twah” or “towe towe” articulation. This also causes intonation to be terrible.

This can be addressed with a simple Bb major scale in quarter notes or half notes. Or go up the Bb scale playing 4 quarter notes on each note. Take it slowly so that you and the students can hear if the notes all sound good.

An exercise with flutter-tonguing may also help, just to get them to feel what a light and quick tongue feels like. David Bilger, principal trumpet of the Philadelphia Orchestra, does flutter-tonguing as part of his daily warm-up and demonstrates it on a Youtube video called “Trumpet lessons with David Bilger, Trumpet Warm up” (start at the 1:30 mark). The purpose seems to be to make the tongue feel light and quick. His exercise looks like this, but you could apply this concept to other notes to suit your needs:

IV. Playing Too Loudly Or Too Softly

This one is obvious, but a deeper understanding of WHY is helpful. For example, when you play too loudly, you are likely forcing too much air through the embouchure. To compensate for this, the embouchure must tense up. Now, because your embouchure is tense, you must blow harder to make a sound come out. So again, we are in a vicious cycle like we discussed in the previous section, and your tone quality is probably terrible, too.

Ironically, playing too soft can also cause embouchure tension. Due to the inadequate air supply, you must rely on tension or mouthpiece pressure to make the note speak.

The point is, when a student is habitually playing too loudly or softly, it is usually a symptom of other problems related to tension, incorrect embouchure, or bad breathing technique. I know because I was one of these kids when I was in the high school band. So teaching correct embouchure, breathing, and posture goes along with getting kids to play at an appropriate volume.

In terms of the ensemble, we do not want individuals “sticking out,” and that is a good way to explain it to students. We all remember how insecure we felt in middle school. A middle (and high school) students are already very concerned with “fitting in” and “not sticking out.” When we use these words, for better or worse, kids can relate to them.

The most fundamental way to achieve balance in your band is to tell them to listen to other people, not themselves, while they are playing. You can use the Long Tones exercise, or even just have the band hold out a concert Bb, for this. Tell them to start by listening to the people sitting to their right and left.  Then listen to their entire section. Then listen to a section other than their own. When we listen to others, we naturally start to balance to them. You do not need to explain how, it just happens naturally. Tell them so. Conversely, it is almost impossible to balance to your bandmates if you are only listening to yourself.

Record the band and then listen to the recording to see if anyone was sticking out. The truth is, one microphone picking up an entire band will not accurately record the balance of the band. That does not matter. The point is to make them pay attention to balance and to understand that the band sounds bad when everyone does not sound the same.

Again, modeling is very helpful. Play your instrument for your students, and play recordings of great bands or master soloists. The President’s Own Marine Corps Band has a great Youtube channel if you are looking for somewhere to start. Kids do not know what they should sound like unless you give them an example to follow.

When I watch other bands at a festival, I know how they are going to play before the performance starts, based on how many kids are slouching in their chairs. But there is more to posture than slouching, and I did not use to understand this. So many kids play with their chin tucked down, and it ruins their sound. It bends the windpipe, misdirects the airstream, and collapses the oral cavity, making good tone and breath support impossible.

Raise up those music stands and get your chins up! If you were going to yell across a football field to your friend, how would you hold your head?  Would you tuck your chin down? Would you slouch over? No, of course not.

The instrument angle in relation to the embouchure is also very important. Flutes need to be parallel to the mouth, both vertically and horizontally. The bell of a clarinet should be pointed between the knees, not far in front or tucked behind the knees. Saxophone neck straps should be pulled tight enough so that the mouthpiece hits you in the top teeth when you are sitting up straight—not between the teeth, nor above the top teeth. Brass instrument mouthpieces should generally be angled slightly downward so that they are 50/50 on the top and bottom teeth (most kids place it too heavily on the top teeth), except for the very rare “up-stream” player that plays with the instrument angled up (see photos of Woody Shaw, for example).

You can have students find the “sweet spot” for their instrument angle by holding out a concert Bb and moving their instrument slowly up and down. At what angle do you get the most resonant, easy sound? If it sounds good, it’s probably correct!

This article could be much longer. There is so much to learn, so many things that have to be “right” in order for our bands to sound great. But in terms of “things I know now that I wish I knew ten years ago,” these would be my top five. And ten years from now, I am sure I will have learned another five things I wish I knew today. But learning and getting better is fun, and I am so grateful to have resources like Band Directors Talk Shop so that we can all learn from each other. I hope this article makes a difference for someone out there. Thanks for all you do for your kids, including wanting to get better by reading articles from this website.

Justin Dickson is the Band Director at Carroll Magnet Middle School in Raleigh, NC, and has been directing high school and middle school bands in North Carolina since 2006.  He is also a member of the Technology Committee in the North Carolina Music Educators Association.

Previous Post: « 20 MORE Analogies That I Have Used With My Band (With Even More Love)That You (May) Have Not
Next Post: How we Got $3000 in Chamber Music for Free (The 64 Gig Challenge) »

Band Directors Talk Shop is all about helping you be a better band director so your students can be better musicians.  It is a collaborative effort of band directors, former band directors, private lesson teachers and fine arts administrators. Learn.  Posts will strive to teach you something you can use in your classroom today. ... END_OF_DOCUMENT_TOKEN_TO_BE_REPLACED