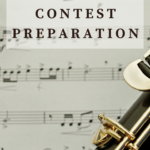 If preparing for concert contest (or any other performance) is like climbing a mountain, then the last 2-3 weeks is the part where things have gone relatively well so far, but now we find ourselves just a few hundred feet from the peak, and, rather than the previous somewhat gentle and obstacle-free slope, the mountain side now goes straight up. It can be the most difficult, and most rewarding, part of the climb (or so my non-mountain-climbing self assumes).

Here are nine tips to make that last part of the ascent as effective and easy as possible. 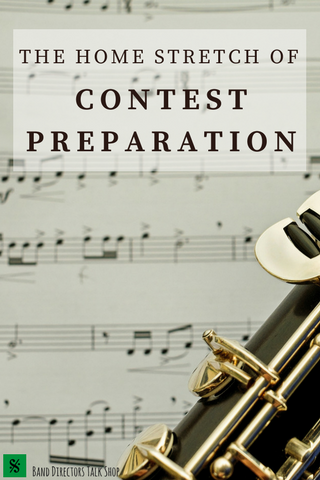 We all have our “go-to” exercises that are used at the beginning of rehearsal each day. At this time of year, the challenge can be making sure that we do “enough” daily drill/warm-up while still allowing for maximum class time for rehearsing our performance music AND allowing time to practice sightreading.

Here are a few suggestions to make effective use of this initial part of rehearsal:

This has been especially helpful over the years as my middle school bands have improved to the point where they could play longer grade 3 and grade 4 selections. Early in the process, I divide each of the three performance pieces into segments. Once all three selections have been covered from beginning to end, my goal is to make sure that I get to each one of those segments multiple times each week in our class time and/or sectionals.

When making weekly lesson plans for class-time rehearsals and sectionals, I keep the list of segments nearby and check them off as they are covered at a given time. I want each segment to have at least two check marks next to it.

Here’s an example of how I have broken down each of our three pieces for this year:

With a band that is playing shorter pieces, it may not be necessary to break them down into so many segments.

For the sake of continuity, the closer we get to the performance, the less we stop for individual mistakes. That does not mean that mistakes are not addressed; however, there are very few perfect performances out there, and playing “through” the mistakes helps train band members to “move on.”

Students are generally aware when they have messed up and, at this point, can correct most individual slips themselves.

How we address mistakes at this point can go a long way toward creating OR preventing performance anxiety. Yes, we want our bands to perform at the highest level at which they are capable, but if every rehearsal is a “picky” one where every single mistake is read out “laundry list” style, then we run the risk of doing more harm than good.

Try to focus on one or two areas that need improvement at a time rather than rattling off the multitude of things that you may have heard. Also, try to work in one or two positives.

If despite your and the band’s best efforts something just isn’t “fixing,” then punt to a future rehearsal or sectional or, if you have the ability to do so, maybe a quick pull-out of a section by a team teacher.

Try to Play Something in Each Piece Everyday

Even if focusing on one particular piece or section of a piece in a given rehearsal, we try to touch on something in the other pieces each day. These could be “go-to” spots that need daily repetition in order to improve (or maintain) the quality of performance or it could be just a quick run-through of one of the music segments described above.

Vary The Routine AND Approach

Here are a few things to try when just rehearsing the music over and over again is getting stale or not producing results:

Focus on the Music More and the Mechanics Less

Assuming that the notes and rhythms are well in place, as the performance gets closer I find it more effective to talk about musical aspects such as phrasing, dynamics, style, and what we want to convey to the audience. The students use the skills in their personal toolbox to make these things happen. In other words, less explaining about how things should work and more trusting the students’ learning and that we have (hopefully) done a good job by this point of giving them the skills to be more accountable for performing and less “receivers of information.”

Cleaning and Other Chores

Because we have the luxury of weekly sectionals and multiple teachers on staff, most cleaning at this point is done outside of rehearsal time or via small-group and individual pull-outs. However, there may be certain areas in the music that need to be addressed and cleaned up in full band.

In addition to the strategies outlined above, cleaning in class may take the form of:

In my experience, the fastest way to improve and gain confidence on performance music is through repetition peppered with appropriate amounts of feedback. There is no substitute for playing the music!

Related Reading:
Preparing Your Non-Varsity Band For Spring Contest and Beyond
Motivate Your Band-Countdown to Contest
The Pre-Contest Syndrome
Does Your Band Sound Better from the Back

Band Directors Talk Shop is all about helping you be a better band director so your students can be better musicians.  It is a collaborative effort of band directors, former band directors, private lesson teachers and fine arts administrators. Learn.  Posts will strive to teach you something you can use in your classroom today. ... END_OF_DOCUMENT_TOKEN_TO_BE_REPLACED