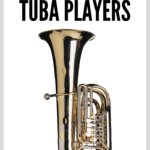 We all “know” that the quality of our concert bands is first and foremost dependent on our tuba players. It is INDEED “All About That Bass”, and without a strong foundation of low-frequency tones the rest of the band cannot build a great sound. 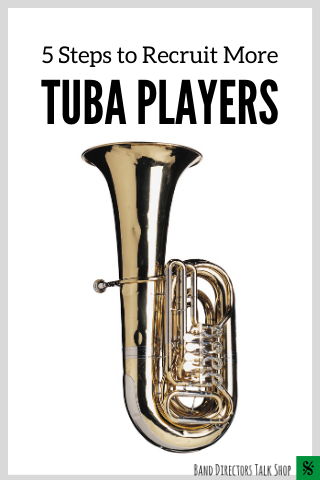 This simple truth hit me like a solid gold sousaphone years ago when I visited one of the outstanding band directors in my state. I was searching for tools, tricks, and new ideas for building my own band program. What I got instead during his Symphonic Band rehearsal rocked my entire universe! The sound of the band was nice and all, but when the 5 members of the tuba section, which had been resting at the beginning of the warm-up chorale, first entered with a rich, powerful whole note…WHOAH!!! What an indescribably sublime sound! I had never noticed the power of the tuba section to really MAKE a band until then. What I realized was that, while I did need new ideas and better teaching strategies, most importantly I needed MORE TUBA!

Now, the big question: How can we convince tiny little middle school kiddos that what they really want in life is to play the unbearably heavy, comically blatty TUBA? Well, it is surprisingly easy with these 5 steps:

5. Deal with over-popularity of the tuba

Step 1 is expensive, but essential: we need to ACQUIRE tubas. You know…the actual instruments. We have to buy them and get enough of them to put them into the hands and homes of 2-3 kids in each grade level.

In order to increase the life of my school tubas and the enthusiasm of tuba players, I handle tuba distribution very strategically. Each tuba player gets to keep one at home all the time, but at school they all share the 3 best tubas, which are always kept in the band room. However, each student uses their own mouthpiece and also wears black marching band gloves whenever they handle and play the tuba. Ta-DAH! Like magic!

Step 2 is totally free! At the very beginning of students’ band experiences we must discuss genetic predisposition and its effect on buzzing abilities. Some kids can buzz high notes, and others cannot. Some can buzz low, and others cannot…no matter how hard and long they try! Then there are SOME who can buzz everything, and we pray for these kids to move into our schools from Texas.

I’ve learned to make natural buzzing ability an integral part of my students’ instrument choices after years of seeing disappointing failure in my own class. I’ve seen hard-working students fail to become decent trumpet players because they just couldn’t buzz high enough, and witnessed exactly the same kind of failure on tuba when months of effort have resulted in a continual lack of ability to buzz low enough. Now that I am a seasoned band director, I REFUSE to assign a costly tuba to a student if he/she cannot hit a low B-flat within a few days of effort, no matter how much they feel like it is their calling in life. I also get a lot of low brass players through this system when trumpet-leaning kids can’t play up to a high C within a few days. It just makes sense, and our students should not be encouraged to take up the fight for something they “think” they want, but which is nearly guaranteed to be a losing battle.

Step 3 is to spend some time during the first days of school letting students try each and every brass instrument (sanitizing spray and tissues are your new best friends). They attempt to play high and low on each instrument and particularly try to play the first three partials. Meanwhile, I encourage kids to consider adopting the instrument they naturally sound the best on or play the easiest. It is some of the best-used time of the entire year, because it saves so much time, effort, and extreme misery later on.

So, kids may arrive in my classroom expecting to play a certain instrument, but I announce that school instruments will be assigned based partly on their genetics, and tell them that final instrument decisions will not be made for two weeks. That’s right…we don’t finalize instrument choices and start playing them in class for two weeks, and I like it that way! (See my blog post about this HERE.)

Of course, you can adjust this philosophy to fit your own needs, whether you have a summer band program, or host a band instrument “petting zoo”, or whatever. Please be my guest and make this step work for you. 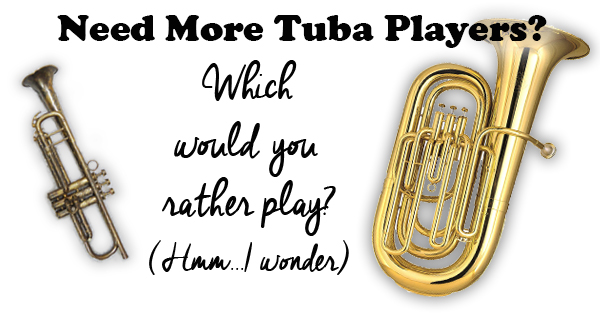 Step 4 is to make the Tuba appealing. It must LOOK and SOUND and FEEL cool! When I found that a wanna-be trumpet player sounded great on tuba, I pulled out two school instruments: our oldest, most beat-up trumpet, and our nicest, newest, shiniest tuba. “Well, you sound great on tuba, but I still have some school trumpets you could rent as well. What would you rather play?” Ha! What a way to stack the deck! “Remember”, I said, “if you choose tuba you will get to keep one at home, so you don’t have to worry about carrying the trumpet back and forth to school all year.” Those two things made a die-hard tuba fan out of him.

The tuba also becomes more appealing if you can play it like a BOSS for your students. You might say, “This is the trumpet”, and play a basic scale on the trumpet. “Now, this is the tuba”, you say as you lift it out of the case with exaggerated swag and proceed to play a killer bass line from “Play That Funky Music” or “Beat It”. Uh, huh…WAY cooler than a scale. You can find the sheet music for about a dozen awesome tuba bass lines on my website HERE. Or, if you can’t play a convincing tuba yourself, then you can have your best tuba player do it for you, or show my YouTube video of Awesome Tuba Bass Lines HERE.

I also make the tuba FEEL cool by describing it as the most essential instrument in the band. I am constantly saying, “What is the most important instrument in the band?” The students learn this answer very quickly and reply in unison, “the TUBA”, with more or less enthusiasm. Meanwhile, the tuba players always sit a little taller and feel more important…because they are! We always listen to and defer to the tuba section when it comes to intonation, dynamics, and more. I tell each new tuba recruit that he/she is now the HERO of the band. In every way, I try to make it psychologically and socially worth all the tiring physical effort of hefting and blowing into the tuba. 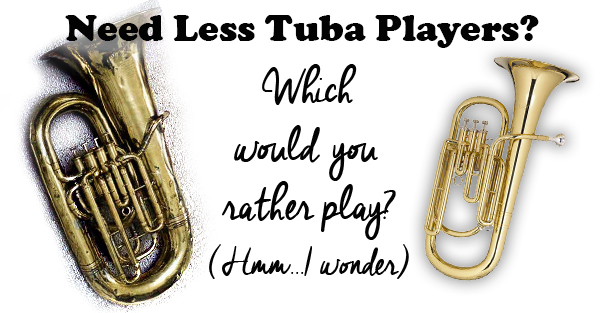 Step 5…wait, there is a Step 5? Oh, yeah…this is what you must do when you have TOO MANY kids that WANT to play the tuba. This year, because of steps 1-4, I actually had five beginners who were all extremely gung-ho about Tuba. Five!!! I only have enough tubas for 3, however, so I had to back off on the “tuba is the sexiest instrument” show and convince the two least-capable low buzzers to switch up to trombone or baritone.

In this situation, as you may now expect, I pulled out our oldest, crummiest tuba and laid it next to our shiniest nearly-new baritone horn. One student instantly chose baritone. (Secret victory dance!) The other student wasn’t too disappointed when I told her that she sounds SOOO GOOD on trombone she could probably make it into our jazz band the following year. Not lying, of course, just helping the kid choose an instrument that is WIN-WIN for all parties.

Let’s hope that these steps work as well for you as they have for me, and that Step 5 becomes the most challenging step you have to deal with in recruiting tuba players. I would LOVE to hear your ideas to make this tuba recruiting post even more helpful, so please comment and help us all build better bands with MORE TUBA. Now I’ve got to REALLY rack my brain over how to get students onto the bassoon…wish me luck!

Curtis Winters is a jazz trombonist and is in his 19th year teaching band and orchestra at Orem Junior High. While completing his MM at Brigham Young University he became obsessive about leaving “no musician behind”, developed an unquenchable thirst for new and more effective pedagogy, and created the NinGenius Music app. He composes for orchestra, jazz band, and concert band, and has presented clinics at Utah, Colorado, Ohio, and North Carolina music educator conferences.

Band Directors Talk Shop is all about helping you be a better band director so your students can be better musicians.  It is a collaborative effort of band directors, former band directors, private lesson teachers and fine arts administrators. Learn.  Posts will strive to teach you something you can use in your classroom today. ... END_OF_DOCUMENT_TOKEN_TO_BE_REPLACED