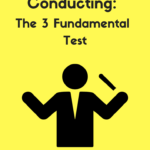 The First Fundamental – Does it help the ensemble?
I often think conductors should be administered the Hippocratic Oath before being allowed to mount a podium: First, do no harm.

Many ensemble problems, in my opinion (and I don’t exempt myself from this), are directly attributable to the conductor. Chief among those is giving too much preparation. My personal credo (not original with me, incidentally) has long been:  Give them all the preparation they need and not an instant more. Every additional instant is simply an invitation for an early entrance. Conductors who give extra preparatory beats, for example, before delivering the initial downbeat or, worse still, counting off aloud all but guarantee an imprecise attack.  Counting off, as I see it, is tantamount to giving them permission not to watch.

It matters not how well the conductor’s job is performed if the ensemble members are not watching. There should never be a moment when they are not in visual contact with the baton, whether directly or peripherally. Further, they need to be trained to understand every gesture. One of my great regrets is that student conducting was dropped from UIL long ago. For many years, each band was allowed three students conductors. There were specified pieces—a contest list of sorts—from which they could choose and they performed in the sight-reading room. They were given ratings, just as in solo and ensemble, and if they made a first division, they got a medal. I had a voluntary weekly conducting class and the students participated with great enthusiasm. As a result, they grew musically in many ways and, needless to say, as players, they became far more responsive to the conductor.

The second fundamental – Does it help the music?
I think it speaks for itself.

The third fundamental – Is it graceful and in control?
It was inspired by the belief that, to the extent it is not those things, it can only result in drawing both the performers’ and listeners’ attention away from the music. The oft-repeated admonition that “the conductor should look like the music” is an apt one, it seems to me. Sadly, some conductors seem to suffer under the delusion that it is they, not the ensemble, that should be the center of attention.

The conductor should avoid extraneous movement.
Every gesture should have a purpose.

Among the mannerisms to be avoided are:

1) excessive extension of the arms either forward or to the side;

2) bouncing from the knees;

4) excessive bending from the waist;

Dr. Gary Garner, professor emeritus of music at West Texas A&M University, retired in 2002 after 39 years as WTAMU’s conductor of bands and orchestra. During his tenure, Garner managed to put the University’s music program on the map. He took the University’s Symphonic Band to Carnegie Hall two times and to perform at the Texas Music Educators Association annual convention a total of 10 times—more than any university band program in the state of Texas. In addition to his teaching and directing, Garner co-authored two books, recorded and arranged music and earned many honors from his peers and colleagues.

Related Reading:
Is it time for a Conducting Tune-up?
Listen with Your Eyes: Identifying the Physical Roadblocks Behind Common Performance Issues
Proactive Classroom Management

Band Directors Talk Shop is all about helping you be a better band director so your students can be better musicians.  It is a collaborative effort of band directors, former band directors, private lesson teachers and fine arts administrators. Learn.  Posts will strive to teach you something you can use in your classroom today. ... END_OF_DOCUMENT_TOKEN_TO_BE_REPLACED