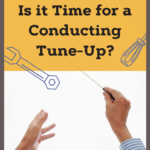 Is It Time for a Conducting Tune-up?
Common Issues that Can Impede the Meaningful Waving of the Baton at Young Musicians

Conducting is probably the most efficient form of communication available to the teacher when rehearsing and performing music. A conductor can greatly help or hinder members of the ensemble.

One does not have to be ready to conduct the Chicago Symphony, but the conductor must be clear and accurate in his or her gestures and delivery of information. My college band director and mentor, Dr. Gary Garner, has often said that the first rule of conducting is the same as the first line of the Hippocratic Oath, “First, do no harm.”

Listed below are some common problem areas that may crop up. (I speak from personal experience.) 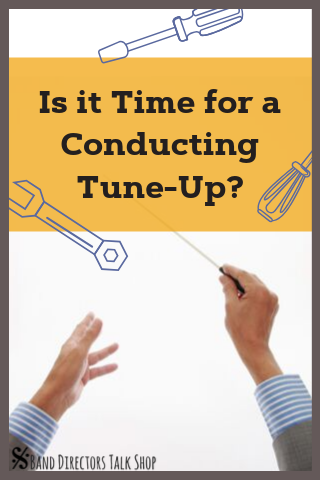 Constantly duplicating with the left hand what the right hand is doing diminishes its effectiveness in making musical gestures and communicating nuance. Mirroring can be effective in small doses, such as when one wants to emphasize volume or style, but constant mirroring is the musical equivalent to texting someone in all caps, all of the time.

It is important to maintain a relatively consistent arrival point for the ictus or beat. When the baton is “floating” from ictus point to ictus point, it can be very difficult for the ensemble to play with accuracy (especially when those points are in different vertical planes). I find it helpful to imagine that I am trying to lightly tap an “X” on a table or drumhead.

Too Many Prep Beats

It is completely up to the conductor’s comfort level, as to whether or not one or more prep beats are necessary. My personal preference is one beat of preparation, but this does not always work as well with a younger groups, especially beginners who tend to only get to play together as a band a few times during that first year.

The more preparatory beats give, the more likely that someone will play early, so work to keep the number to the absolute minimum needed (usually no more than one complete measure’s worth), and make sure that all ensemble members are aware of what is going on.

Especially when the director feels that band members are not watching, it is very easy to let the conducting pattern expand to a point that things are kind of “all over the place.” Reducing the pattern and conducting “smaller” can often be very effective in drawing band members in to focus more on the baton.

TMI (Too Much Information)

Cues, style, tempo, and all sorts of other nuances can all be effectively conveyed through conducting; however, one cannot show everything that is going on. Too much clutter can cause confusion, and, like mirroring (or trying to have a conversation with someone in a loud restaurant), can reduce the effectiveness in communicating important information.

Conducting AT the Ensemble

Ideally, the plane of the ictus and other gestures should be fairly perpendicular to the floor. When conducting motion and gestures are being performed more out and away from the body and toward the ensemble, it can be hard for musicians to discern exactly where the point of arrival for the beat takes place.

Differing Points of Departure and Arrival

When giving prep beat, the baton should arrive back from where it started. For some reason, it is very common for conductors to give the ictus at a point above (sometimes by a few inches) from where the prep beat originated.

When my own students are having issues with starting together or when I observe another conductor having the same problem with their group, it almost always boils down to the ictus of the first beat occurring above the point from which the baton started or…

Prep Beat Not in Tempo

Another problem affecting the start of a piece, both in terms of precision and tempo, can be failure to give the preparatory beat in the tempo that is intended for the piece of music itself. This can occur because the prep is too fast or too slow relative to the desired tempo or because the downward and upward motions of the baton do not occur at the same speed

It is also common, and closely related to this issue, for a conductor to pause or freeze at the apex of the prep beat. This tends to occur especially when the conductor breathes with the movement of the baton and then holds his/her breath at the highest point of the prep (rather than not breathing or taking a full breath for the entirety of the prep beat, which is more reflective of what the ensemble members should do…after all, you would not want a student to breathe in, hold the breath, and then exhale into the instrument).

To test that the prep beat is in tempo, tell students that you will give only the prep beat and that they are to count beats in the tempo given. If there are no issues with the prep beat, then band members should be able to start together and count in tempo without further conducting.

When things go south, it is human nature for the director to think that he or she needs to “conduct harder.” Much as with pattern size above, making a conscious decision to relax and add clarity to the conducting by perhaps doing less is usually much more effective than resorting to the conducting equivalent of a “Red Alert.”

Young groups especially tend to put too much responsibility on the conductor in the area of keeping time. Band members must be trained and encouraged to internalize the beat or pulse. When students look up, the conducting should reinforce their own sense of inner pulse, not substitute for it.

When running into problems in this area, one solution can be to instruct the band that you will give them one measure and then stop conducting. They are to continue playing, and you will cut them off when the pulse breaks down. Almost immediately, the band’s sense of time and precision will improve because now the responsibility for maintaining that tempo is “on them.”

If one conducts at too high of a horizontal plane, it can greatly cut down on the variety possible of gestures. Keeping the plane lower allows for a much larger potential expressive pallet, and it’s possible to show greater differences in aspects such as volume and style.

Ignorance is Not Musical Bliss

No matter how technically and artistically sound, conducting is only effective if band members are aware of and responsive to that conducting. In other words, students must be taught to watch and react, and then must be held accountable to do so. For strategies on encouraging ensemble members to watch, see my previous article, Getting Band Students to Look Up. .

Jim Shaw is the Director of Bands at Willow Wood Junior High School in Tomball, Texas. A core contributor to Band Directors Talk Shop, he holds Bachelors and Masters degrees from West Texas A&M University and is an active clinician and adjudicator. He can be reached at jshaw322@gmail.com and has resources available in his store on Teachers Pay Teachers.

Related Reading:
Conducting: The Three Fundamental Test
Do Sweat the Small Stuff: Full Band Ensemble Tips
Does Your Band Sound Better From the Back?

Previous Post: « Why Band Matters
Next Post: What is a small (or even silly) thing that drives you crazy about being a band director? »

Band Directors Talk Shop is all about helping you be a better band director so your students can be better musicians.  It is a collaborative effort of band directors, former band directors, private lesson teachers and fine arts administrators. Learn.  Posts will strive to teach you something you can use in your classroom today. ... END_OF_DOCUMENT_TOKEN_TO_BE_REPLACED 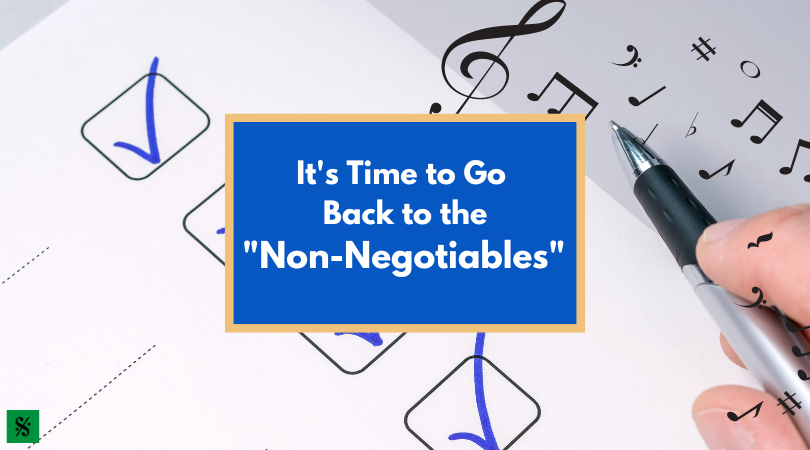