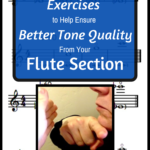 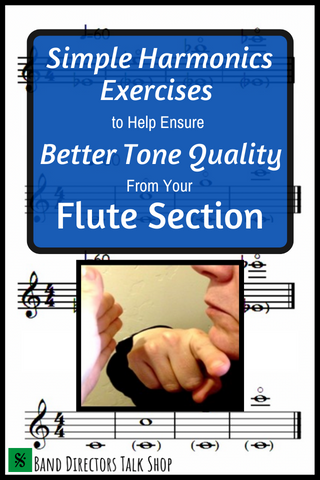 Over many years I have taught hundreds of flute clinics and boot camps and the question most often asked of me from band directors and band flutists alike is how to best produce a clean, projected tone. Real-world experience with thousands of students combined with years of research has led me to develop a set of simple and successfully time-tested harmonic exercises that consistently help band flutists achieve an overall better tone quality. And the best part is that the improvement is achieved when put into practice for only minutes a day, providing first that the proper embouchure technique is applied. This requires students to play with proper embouchure size, shape, direction, and speed of airstream, and they must be sure to apply the correct lip plate pressure against the lower lip. The “PIP Method” is a simple and reproducible way to ensure that this occurs by helping guide the student to physically, visually, and viscerally self-identify embouchure defects and correct them simply by using a mirror to ensure proper position and placement. This method, practiced in concert with simple harmonics exercises as provided here, can substantially improve flutists’ overall tone quality.

A note’s correctness is determined by the proper tuning of its pitch and the quality of its sound to the listener – its tone. A tone consists of several different component sounds collectively called its component harmonics. The way we see light is a commonly used analogy that can be employed to help students understand the idea of how we hear a musical note. We see sunlight as one color, but if that light is shined into a prism, we see it as a rainbow of constituent frequencies. Similarly, a tone produced by a flute is made by a myriad of components, or harmonic notes, sounding together at once. And, just as light can be separated into its component colors, a note can be separated by sonic analysis through a microphone into a series of component notes that together constitute the single pitch we hear. These components are called the pitch’s harmonic series, and research has shown that our ears are drawn primarily to the lowest note in the harmonic series, followed next in order of perception by the constituent notes that come together to make that note – the “overtones” or partials. My harmonic exercises assist the student by literally having them play and hear the overtones for a given fundamental pitch. They learn to “fundamentally experience” the notes that exist within a specific note while having fun doing so.

To help students understand why these exercises are important to achieving a cleaner sound and a better tonal quality, they need to be introduced to the three basic steps that make up what I have coined my “PIP method.” “PIP” is the abbreviation orthopedists use to call the second joint on the index finger; it stands for Proximal Interphalangeal joint. The PIP joint gives flutists a key landmark for definitively determining the airstream’s direction, which is key to producing consistently clean quality tone. There are three steps to this process:

Harmonics Exercises are not only informative to the student but can be fun as well. Telling young flutists that each note they play is comprised of many notes called overtones or partials helps them understand better why they are practicing harmonics: playing them leads to playing with a richness and beauty our ears associate with quality flute tone. Practicing focused primarily on improving only the fundamental, without its many overtones, does not. Flute sections often struggle to achieve a good overall tone quality with better intonation and projection. The following harmonics exercises, applied in concert with the PIP techniques explained above, will help young flutists strengthen the upper lip – this is a crucial step to the formation of a good embouchure. This, in turn, also helps the student successfully play higher/louder tones because their now correctly shaped and strengthened embouchure allows them to apply the necessarily greater airspeed and volume of air required to produce a quality projected tone. Why is this important? Because young flutists’ embouchures are often too large or, in the inverse, too small or pinched. Harmonics exercises assist the young flute player to refine their embouchure hole, uniquely aiding them in this task.

Harmonics exercises give the student:

Below are short and easy exercises for both younger and more advanced players to practice. I have younger students begin by playing a low Eb above middle C, and the more advanced players begin with a middle C – this is because the E flat is easier for less experienced flutists to produce. However, these exercises can be practiced on other notes, such as the low Db, or low D, so that within a couple of weeks or so, even the younger players will be able to produce the harmonics of any of these fundamentals. All exercises should be played for just a couple of minutes a day without any vibrato, as softly (quietly) as possible, and no faster than the tempos indicated.

In sum, choose the example that uses octave Eb’s for less experienced players and the examples that use the octave C’s for the more advanced ones.

Each exercise will consist of two parts:

Have students play this exercise exactly as written.

As in Part 1, bar 1 begins with the fundamental or root tone, and the goal is to introduce and produce the first overtone or harmonic of the series. To meet this goal of properly playing the harmonic overtones for this fundamental, students must bring out the notes that reside within that fundamental. For this example, have students play the harmonic note in the second bar by leaving the first finger on the left hand down for the upper Eb while increasing the airspeed; this will produce a sound an octave higher – the note will sound a bit hollow and won’t be as stable, but provided that the key remains down (do not alter the fingering), the student will have played the first harmonic! As the exercise is repeated, the goal is to play this harmonic, the octave, without splitting or cracking the note. Making the embouchure rounder and smaller while increasing the airspeed (blowing a bit harder) will increase the sound of the upper note, the harmonic, to speak, but encourage the student to play the harmonic as softly as they possibly can. Don’t worry if they can’t play the chosen harmonic super softly at first – it takes practice. But don’t be afraid to have them experiment playing with different airspeeds and various embouchure sizes and shapes – there is just as much to be learned through trial and error. Just let their ears guide them towards the goal of producing a sound that is as clean as possible. Repetition will improve their sound and improve their projection in a short amount of time. NOTE: While the harmonics or overtones produced will sound like the fundamental in pitch, there will be tone color differences which produce a thinner sound; the intonation may sound slightly flatter or sharper depending on which fundamental note is chosen to base the harmonic.

Have students play this exercise exactly as written, with no harmonics:

TIP 2: Refer them to a mirror often to check their embouchure technique.

Have students play this exercise exactly as written, with the regular fingerings and no harmonics. Remember to try and utilize the proper embouchure techniques as the goal is to produce the cleanest sound. Also, remind them to maintain proper pressure against the lower lip!

Now, the goal is to play the third harmonic in the series. This overtone sounds two octaves above the fundamental. Again, remind students to use only the fundamental fingering of the first note, and bring out the harmonic sound by utilizing a faster airspeed and smaller embouchure. Remember to encourage them to play as softly as possible while also sustaining proper pitch. TIP: To better focus their airstream as needed to play the higher notes, or to help students play those notes more softly but still in tune, suggest that they bring their lower jaw forward slightly as if saying “ooooooo,” and their task will be easier.

Now that students have experience with the art of playing harmonics, it’s time to have them play a more challenging passage. So have students play the exercise below – again as before, first without harmonics so students know what the exercise should sound like when playing with the harmonics:

Now have students play the exercise below with the cleanest tone possible, again aiming to produce the quietest tone possible without any cracking or splitting of the harmonics.

Now, it’s time to have students play an even more challenging passage that addresses the playing of notes from all three registers. So have them play the exercise below – again as before, first without harmonics, so students know what the exercise should sound like when playing with the harmonics.

Playing harmonics with these exercises yields several helpful benefits. They help students learn to control dynamics, and in particular, they help flutists learn to play softer. In addition, they will find that their attacks and releases of notes will also improve with the resulting strengthened/developed embouchure muscles, especially in the upper lip, which is where most of the tonal heavy lifting is done. Having the flute section warm up with harmonics is one of the quickest ways to prepare them for their performances from the perspective of both the embouchure and the lungs. Taken together, these methods will prove to be especially helpful when pressed for time before a field show, for example.

So, to sum up, playing harmonics on the flute with the PIP method as the foundation can be an extremely beneficial exercise to help improve flutists’ overall tone quality and projection, as well as that of their flute sections. Making it all a part of the everyday session is a win for everyone in the Flute section. Practicing these harmonics for just a couple of minutes a day will improve everyone’s confidence and overall performance. Taken together, these benefit the overall flute section by improving the sound of every member.

Ms. Harris is an International Yamaha flute, piccolo, and low flutes Performing Artist and Clinician performing all over the world and is also the Flute Professor at College of the Sequoias and Bakersfield College. Ms. Harris is a bestselling author of three flute and piccolo pedagogy books: The Flute Boot Camp Manual, Picc Perfect, and The Lyric Flutist, Published by Wingert-Jones Publications. Ms. Harris has given over 2000 Piccolo/Flute clinics across the USA and has been selected to present at The Midwest Clinic, NYSSMA, NAFME, NFA, TBA, CMEA, SCSBOA, CASMEC, GMEA, CASMEC, and TMEA’s Centennial Convention in 2020. For over two decades, she has helped band flutists and band piccolo students achieve their best performance skills through in-school clinics and summer programs such as Music for All. Ms. Harris also is the Director of the Central Valley Flute Academy. To contact Ms. Harris with any questions, please use the contact information below:

Band Directors Talk Shop is all about helping you be a better band director so your students can be better musicians.  It is a collaborative effort of band directors, former band directors, private lesson teachers and fine arts administrators. Learn.  Posts will strive to teach you something you can use in your classroom today. ... END_OF_DOCUMENT_TOKEN_TO_BE_REPLACED