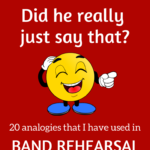 I believe very strongly that humor plays an important part in the band rehearsal, especially with younger groups. It helps keep students engaged, and it can work as a wonderful “reset button” when tensions are starting to get high. The director has to play to the strengths of his/her personality, of course, but even bad jokes or analogies can be effective in contributing to a positive classroom atmosphere.

I’ve listed 20 of my favorite analogies below. Some of these could be taken as snarky or overly sarcastic. Tone is very important, of course, and, of great importance, the students have to know that you care about them before you start dropping any sort of constructive criticism on them, no matter the delivery method. (Plus, smart kids LOVE sarcasm…so, take that educational higher-ups who say we teachers shouldn’t use it.) 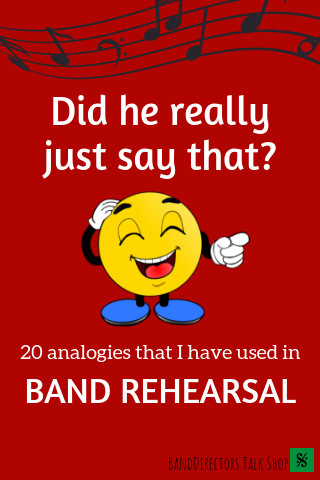 1. Brass, that had more cracks than a plumbers’ convention.

2. That kind of sounded like a cow getting its face dragged across a very large cheese grater.

3. Much like National Geographic, that had a lot of issues.

4. Breathing right before the peak of a crescendo is like running a race and then stopping at the finish line, just before you break the ribbon.

5. Can we make like Red Ribbon Week and Just Say No to Crack?

7. That was about as precise as a battalion of Imperial storm troopers.

8. We don’t play the comparison game. After all, the nicest thing in the dollar store is still only worth a dollar while the cheapest painting in the Louvre is priceless. It’s all relative.

9. OK, that was going really well, but then, much like the part in Spider-man 3 where Peter Parker goes all emo, things went horribly wrong.

10. Playing too loud on trills is like wearing too much Axe. It’s a deodorant, not a lifestyle choice.

11. Saxes, the flutes and clarinets did such a great job of setting up your entrance with this beautiful, lyrical passage, and then you came in and went all Godzilla vs. Bambi on it.

12. That mistake was so big that it beeps when it backs up.

13. Playing the notes and ignoring the markings around them is like driving down a city street, oblivious to the traffic signals. Bad things happen.

14. Trombones, you were so lost that time that you were on my milk carton this morning.

15. There are three constants in this band hall: gravity, the speed of light, and me telling you that we can do better the next time.

16. You’re going skydiving. How much of a detail person would you want the person who packs your parachute to be? That’s how concerned you need to be about playing this part correctly right here.

17. If what we are going for is that part in The Wizard of Oz when Dorothy opens the door and the world is suddenly bathed in color, we are getting there; however, instead of tentatively stepping through that door and gazing around in wonder, Dorothy is curled up in a ball on the floor screaming as she slowly drowns in a salty pool of her own tears. But it’s close.

19. The human brain can go 60 seconds without any oxygen before really bad things start to happen. I think we can make it through the three-second whole note in measure sixteen.

20. Can we maybe have a bigger dynamic contrast happen here and create more drama. Like, “12-year-old girl whose phone battery is down to 8 percent and she can’t find her charger” drama.

Band Directors Talk Shop is all about helping you be a better band director so your students can be better musicians.  It is a collaborative effort of band directors, former band directors, private lesson teachers and fine arts administrators. Learn.  Posts will strive to teach you something you can use in your classroom today. ... END_OF_DOCUMENT_TOKEN_TO_BE_REPLACED 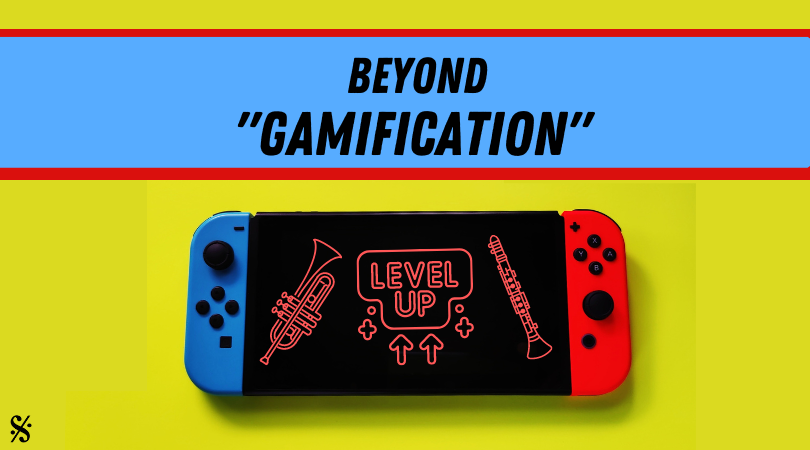