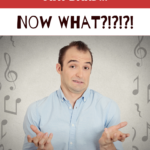 Standing in front of your own ensemble for the first time can be simultaneously thrilling and intimidating. There is a massive difference between working with a group during student teaching and taking charge of a band from the beginning of the year, and this article aims to help the young band director get off to a great start. 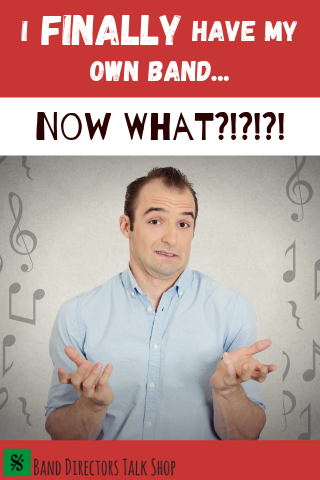 Go In With A Plan

In life, first impressions count for a lot, and this is especially true when it comes to teaching. Plan and then over-plan for the first few rehearsals so that dead time and the act of “flailing for something to do” are eliminated.

While basic ground rules (how we enter the room, what happens at the tardy bell, what we have at our seats, etc.) need to be established up front, procedures and other expectations can generally be taught “on the fly.” The sooner you can get to the business of rehearsing, the better.

When to get instruments up, how ensemble members sit in their chairs during various parts of the rehearsal (when playing, when counting rests, when receiving instructions, etc.), expectations for marking music, and other procedures can be most effectively addressed and reinforced by talking about them as they are encountered, rather than laying out a laundry list on the first day of class.

Planning is very important, but when something is not working or you have reached a point of diminishing returns, it is OK to move on and re-group. One way that we learn, along with our students, is by trying things, figuring out what did and did not work, and adjusting from there. You’re not going to lose face with your students or coworkers if you end up needing to find another way.

Students like to know that you know who they are. Stand tags with student names printed big enough to see from the podium (or elsewhere in the room) are a must. The director can create these or you can have the students make them and decorate them with things that reflect their interests.

Eye contact is very important. It is easy to get buried in the score or exercise one is talking about. If you expect students to look at you when you are talking, you also have to look at them. Be sure to take time to make sure that students are engaged. Just because the room is quiet does not always mean that everyone is listening.

One of the most significant and impactful ways to make connections is through making music. Yes, fundamentals are extremely important, and taking time to focus on those fundamentals at the beginning of class is a great way to put things in place that will build the ensemble… but the kids are not there to play Concert F’s, long tones, and work on articulation for 50 minutes every day.

If the band is in a place where fundamentals must be addressed before real progress can be made, look for ways to address these fundamentals through music in addition to all of the wonderful exercises and drills at our disposal. One can find ways to teach tone production, balance, articulation, changing together, etc., through the music. Also, by applying these fundamentals to music that will be performed, you are showing the kids the importance of the drill and exercises.

It is important that your band reflect your teaching personality and your expectations, but, if change is needed, be wary of trying to do too much too soon. Set priorities and then chip away at change. Students want to know that you value what has been done in the past. Plus, too much change too fast can be overwhelming. Baby steps.

Even when stepping into a successful program with a well-established reputation for excellence, try to avoid making assumptions as to what the students know and do not know. I had the great fortune to be named as the new head director in a prominent middle school band program in West Texas very early in my career (probably too early, but we won’t go too far into that here).

I had grand plans for the first rehearsal and all of the wonderful things we were going to accomplish only to find out very quickly that, because the entire band was basically one day plus the summer removed from beginning classes, the kids did not know the first thing about being in a band. Instead of jumping right into “Star Wars,” “Louie, Louie,” or whatever it was that I had planned for them, we ended up spending time learning how to sit in the chair and what the heck a Concert F was.

I followed a fantastic teacher, so I also assumed that the students would know how to behave in rehearsal. That particular assumption stayed with me for far too long, and it made for a very long year for both me and the band members.

The moral of the story for me was that when stepping into a new position, or even a new school year in the same job, one can’t make assumptions as to what the students know and don’t know. This realization, along with the lessons picked up with experience, made for much smoother transitions into the two jobs I have held since that one.

Very rarely is a student behavior or mistake directed at you, the teacher. When redirecting a student who is talking or acting out, it is important to address the action or behavior and not the student. In other words, don’t make it personal. This is much easier said than done, especially if you have a band member or members who are really pushing your buttons. It can be very helpful to take a breath and ask yourself, “If this was my child, how would I want the teacher to talk to him or her?”.

Even with 25 plus years of experience, I sometimes have to go into what my coworkers call “clinician mode” where I pretend that I am working with someone else’s band rather than my own so that the amount of emotional investment on my part is reduced. This is especially true early in the year when students are still figuring things out, or during days later in the year where a rehearsal is bogging down or we’re just having an off day.

Be Persistent and Consistent

Hold students to your expectations, and consistently address them when they are not being met. Yes, it’s OK to sweat the small stuff as long as you understand that it may take time and persistent repetition to get there.

It’s Not About You (But It Is)

Yes, you learned a lot in college, but don’t feel the need to over-explain everything you say. There is a fine line between giving students the information that is needed and overloading them.

As a young teacher, it can be very easy to fall into the trap of wanting to impress students (and/or even colleagues) by “showing off” what you know. There is a reason that the monotony of Charlie Brown’s teacher resonates with so many of us. Don’t fall into the trap of regurgitating information; instead, find a way to put it into action.

The more the ensemble can play, interspersed with brief corrective feedback from you, the faster it will improve.

None of us walk into this profession with all of the answers, but the good news is that so many in our profession are willing to share what has worked (and not worked) for them. In this particular day and age, there are so many great resources: social media groups, online publications you can find through Google searches, professional development opportunities held throughout the year, and availability of more experienced directors.

A common fallacy believed by many young directors is that they are “not ready” to have a mentor or clinician in rehearsal because the band is “not good enough” or they, the director, could “look bad.” Honestly, most experienced teachers very much remember what it was like when they themselves were starting out, and very likely also remember someone who took time to help them.

By the time your band is “ready” for a clinician, whether it be a more experienced member of your staff or someone you bring in, it may be too late. A mentor can help you to nip undesired elements, maybe even some you of which you were not aware, in the bud. He or she can also make suggestions on pitfalls to avoid, ways to get information across more effectively, and so much more. Remember that your mentor knows how to address these issues most likely because he or she experienced them also.

A positive rehearsal atmosphere is one in which band members are not afraid to take risks because they understand that making mistakes and learning how we deal with them are part of the process. A mistake by the director, whether it be something as simple as a counting error or a bad decision that leads to bigger problems, is an opportunity to teach students how to handle errors. As the old adage goes, the first step to solving a problem is admitting that it exists.

There’s an old-school teaching adage that the teacher should not smile before Thanksgiving (or, if really hard core, Memorial Day). Personally, I feel that this is a recipe for disaster. While band members need to understand that the director is the authority figure in the room, they also need to see that director as being approachable.

The use of humor can be a wonderful release valve when things get tense or the rehearsal is not going well. One has to be careful not to “lose the students,” but hard work interrupted by occasional breaks is going to be more productive than a constant “nose to the grindstone” approach.

You don’t have to be “funny” to use humor. In my experience, bad jokes (or “Dad jokes”) are better than nothing.

Be mindful of sarcasm. I more than occasionally dabble in the sarcastic arts myself, so I’m not saying you can’t ever use it (the types of kids drawn to band tend to appreciate sarcasm), but the kids have to know that you care about them, and it can’t be negative or personal.

Jim Shaw is the Director of Bands at Willow Wood Junior High in Tomball, TX. He can be reached at jshaw322@gmail.com. He has recently opened a Teachers Pay Teachers store which can be found HERE.

Previous Post: « Tunes with a Twist – Unison Lines for Full Band
Next Post: How to Earn TpT Credits for Free Band Director Resources »

Band Directors Talk Shop is all about helping you be a better band director so your students can be better musicians.  It is a collaborative effort of band directors, former band directors, private lesson teachers and fine arts administrators. Learn.  Posts will strive to teach you something you can use in your classroom today. ... END_OF_DOCUMENT_TOKEN_TO_BE_REPLACED